I went in for the previously described surgery.

This is a photo of what the opening from the Moh’s surgery looked like.  You will recall that I was fortunate and the first sample that was excised got it all.  If I was a dermatologist, I would be able to tell you exactly how many millimeters of margin has to be clear of the Basal Cell Carcinoma in all directions, but I can’t.  About the closest I can estimate was that the opening was about as long as a dime (?) but slightly narrower.  The black spots you can see around the opening of the excision was from the cauterization to stop the bleeding.

One of the things that I thought felt pretty unsettling, was that I had to leave the surgeon’s office in the morning with this hole in my face and travel to the surgeon who was going to close the hole in my face later that afternoon.  I was so out of it from the lorazepam, that the actual day of the procedure I could have cared less.

Leaving the doctor’s office, I was bandaged like this…

We arrived at the surgery center with plenty of time, and despite learning that I would not be under general anesthetic for the surgery, I was quite OK with everything.  Remember that the majority of the anxiety I experienced was in the weeks leading up to the procedure.

Leaving the surgery center later that day, I was bandaged like this and had to leave this bandage on for two days.

I was a little apprehensive about removing the bandage.  This is exactly what I saw when I did.

As you can see there was a little bit of bruising and swelling, but the stitches were tiny (applause to Dr. Stallman’s technique) and the scar laid nice and flat.  You can probably identify that the scar is quite a bit longer than the original opening.  Again, I am not a surgeon, but my understanding is that in order for the scar to lay nice and flat a longer incision had to be made.

It looks about the same, you can see the shine from the Bacitracin that I was advised to use constantly.  You can see that there was a little more yellow color from the bruise being reabsorbed into my system, as it began to spread out over my face a bit more. 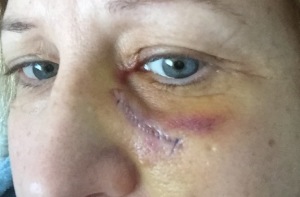 I think you see the stitches a bit better in this photo and also see that the yellow is spreading farther throughout my face. 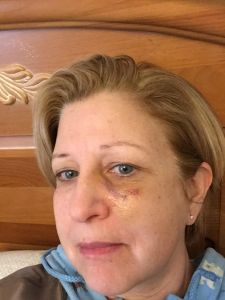 You can see that while there is still some bruising, it is greatly diminished, and even though I still have the stitches in my face, I was a lot less reluctant to go out in public looking like this!  I even went out for lunch with some friends. 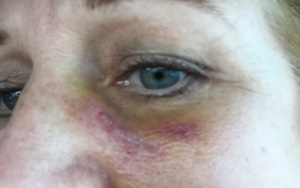 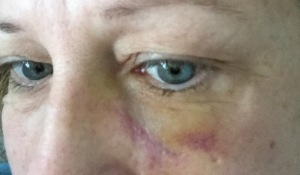 One week to the day…There is still some residual bruising and a thin line in the area where the stitches were previously.  Without any make-up, one week after the surgery this is what my face looked like.  I actually took these photos in my car with my phone while still in the parking lot of the surgeon’s office.

From here on out, I will only update weekly.  I am supposed to use a silicone scar treatment product that Dr. Stallman’s office is ordering from me.  As I have not received it yet, I stopped at Target and purchased some ScarGuard ®  that goes on with a brush like nail polish. and creates a shiny, thin, line on my face.  I am still experimenting with trying to put on cosmetics, especially foundation and keep the scar treatment from peeling.  I am expected to apply and reapply the silicone treatment twice a day for the next six months and NEVER leave the house without a sunscreen containing zinc for this same time (really, forever!).  Of course, every cosmetic I own has an SPF of 15 or greater, even my moisturizer and has for some time, so this won’t take a great deal of adjustment.  I love the vampire-like glow that I get from the zinc in the sunscreen! 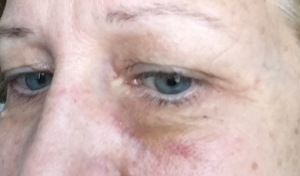 I still have some bruising and swelling.  The scar is visible as a purple-hued line.  There is a slight flattening of the line near the center that appears a bit wider and more purple than at the ends.  I hope that the scar treatment medicine will help reduce this a bit.  With make-up on, most people state that they can barely notice it.

Most of the bruising is gone.

There is a slight bit of swelling, a bit of a bump, where the sutures were and approximately 1-2 cm around the periphery of the sutured area.  You can detect a slight reddening of the surface.  I am using a prescription scar formula that my insurance did not pay for, but the cost is less than most skin care products I currently use.  I now get in the routine of using my SPF 60 Sensitive Skin sunscreen before applying any cosmetics.  Most of my moisturizers and foundation also have an SPF factor in them.  I am not sure whether one cancels the other out or whether I average the values to find out what the SPF factor of the multi-layers of protection provide me?

I also use an over-the-counter silicone based scar reduction product that is applied like a nail polish to the sutures area.   This goes on last and preferably some time after the moisturizers, otherwise it does not stick.

Four Months after the surgery, I am very happy with the results.  Although I can’t deny the aging of my skin, that had nothing to do with the surgery.  I went through a period about 6 weeks after the surgery where I was very concerned about the bump under the scar as it seemed very hard and well, for lack of better words, bumpy.  I saw Dr. Stallman and he told me that this is, in fact, part of the process and that the scar would soon be going through “remodeling.”  It was OK to put a considerable amount of pressure on the scar and that would help it with the remodeling phase.  It turned out that he was right and now there is no bump that I am able to feel whatsoever.

There is a small barely discernible hair line scar, no larger than one of my wrinkles with a slight depression at the end of the scar.  With cosmetics on, it is not noticeable.  I have been using ELTA MD 41 sunscreen that has a mild natural tint to it and really not even foundation on top of that most of the time.  I switched from the paint-on silicone to a topical gel called Kelocote, and that is better to put on after I am done with my cosmetics.  Overall, I am pleased with the results and glad to be able to say that I am now skin cancer free for the time being.  I still have to have annual exams by my dermatologist, to look for other potential outcroppings of skin cancer, but will feel much more confident with the surgery after having such good results with this one.

Please note, in this photo, I have on no sunscreen or cosmetics.